Say ‘I Love You, Always’ with Anniversary Rings at Ken K! 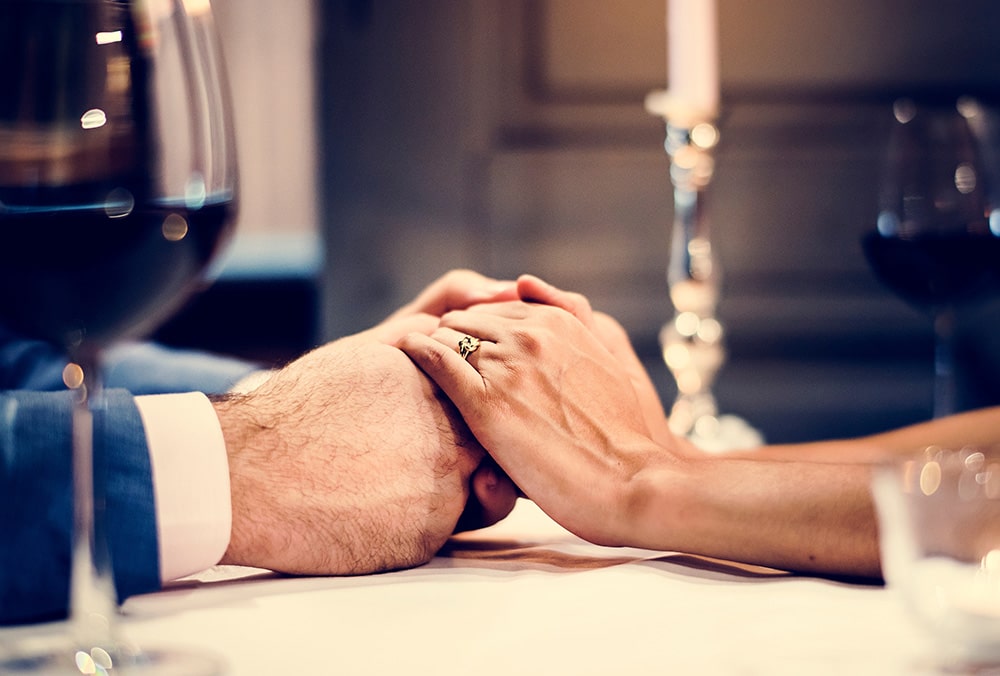 Wedding anniversaries are a big deal and finding an anniversary gift that perfectly encapsulates all of the love you shared on that special day can be difficult! If you’re on the hunt to find the perfect jewelry gift for your loved one, Anniversary rings are an incredible way to symbolize the intense adoration and closeness that ties you together. It’s also a neat little add-on to the ring that started the whole thing – call that a romantic reminder!

With so many anniversary bands to choose from, it’s important to take your partner's style and preferences into account while also thinking of your shared, one-of-a-kind relationship. Rings can be embezzled with different diamonds or gemstones and also made out of various metals to cater to anyone’s unique taste.

What Style Ring Do You Give for an Anniversary?

What style of anniversary ring or anniversary band would make for the perfect anniversary gift for your loved one? Again, there are nearly endless styles and ring designs to choose from, but most commonly, anniversary rings are in the shape of a band or eternity ring rather than having a center diamond or gemstone like those found within engagement rings.

While the styles of anniversary bands differ, there’s no code to follow when it comes to picking out a particular style. Anniversary rings are supposed to be a memento of the love you share with your partner and should embody that special connection you have. 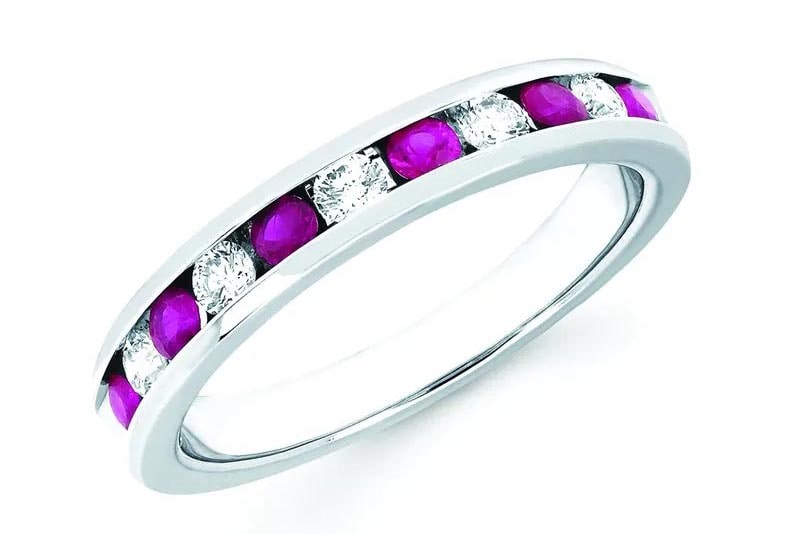 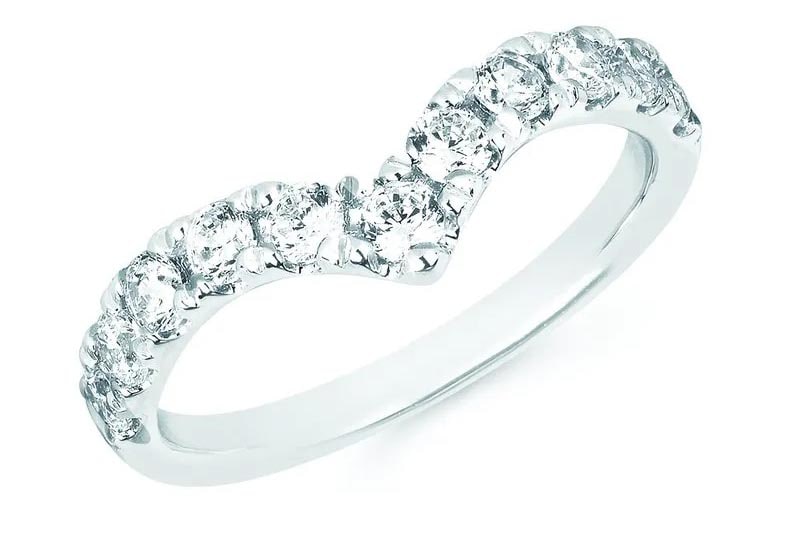 Just like an engagement ring is a symbol of you uniting in love with your partner, an anniversary band represents a significant milestone within your marriage and is meant to commemorate that. An anniversary ring is a fantastic wedding anniversary gift because it is a beautiful reminder of the everlasting love that you share. Plus, every time they look down at it, they’ll be reminded of the day you said “I do!”

It’s very common for anniversary bands to be stacked with wedding and engagement rings. This gorgeous channel set sapphire and diamond ring could be a stunning accent to her engagement ring! 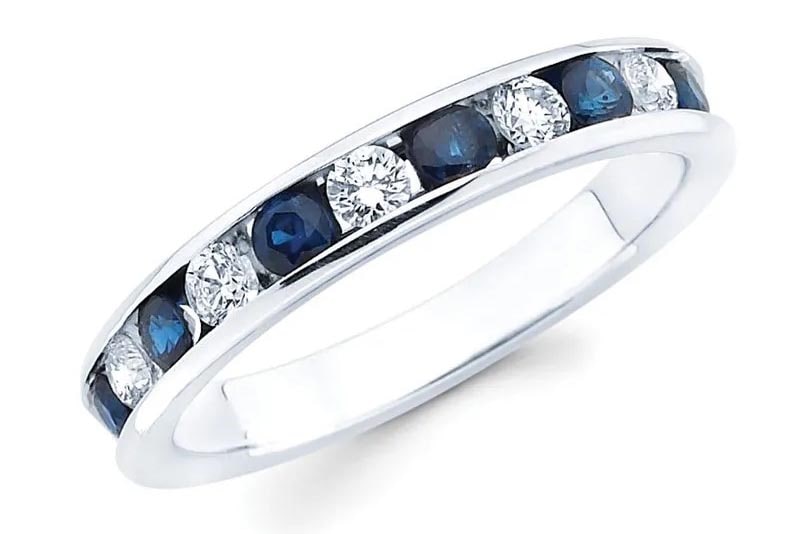 Anniversary rings offer you the chance to commemorate the love you share as it continues to grow throughout the years.

When is the Right Time to Gift an Anniversary Ring?

Every moment of every year with your loved one is a moment to celebrate, and we know that rings and beautiful jewelry designs from our wide selection at Ken K. Thompson are sure to put a smile on your lover’s face and fill their hearts whenever the gift is given!

Are you coming up on a special anniversary date? When it comes to particular milestones, sometimes there are traditional metals or gemstones that are gifted. We’re not saying you need to stick to tradition, but sometimes a little direction can be a big help!

Here is a quick anniversary jewelry gift guide to make selecting that perfect piece of jewelry even easier for you!

Fine jewelry made of gold is often given as an anniversary gift for a first anniversary. This lovely golden emerald and diamond anniversary band might make for the perfect gift for your first year together as a couple! 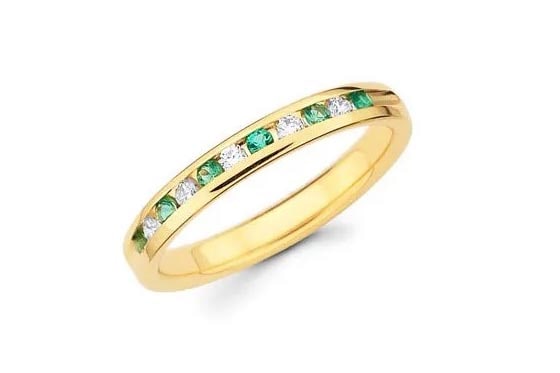 For your fifth year together, the sapphire gem is popularly gifted as it comes in many different shades. Something like this sapphire and diamond anniversary band could offer an incredible fifth-year sparkle! 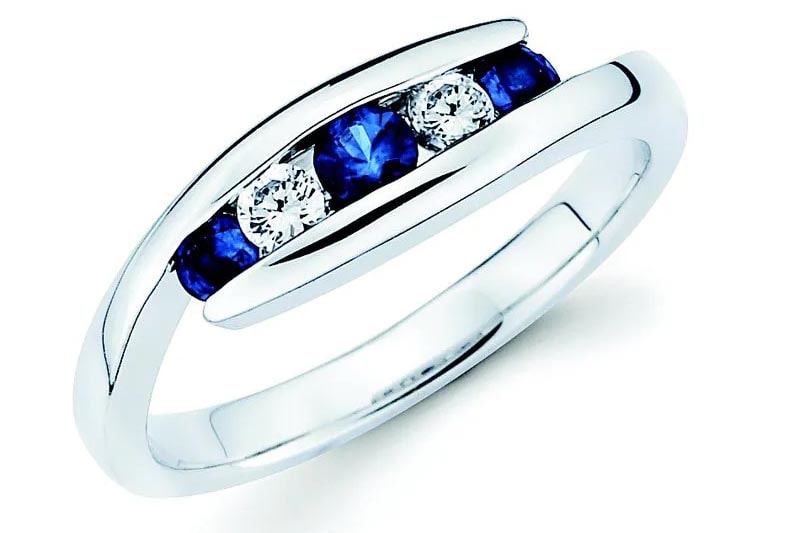 Bringing the carriage back around to the first anniversary, gold jewelry is a fashionable gift for your fiftieth anniversary, too! Gold is a symbol of love and passion, making this Channel set ruby and diamond gold anniversary ring a real contender in your hunt for the perfect anniversary gift! 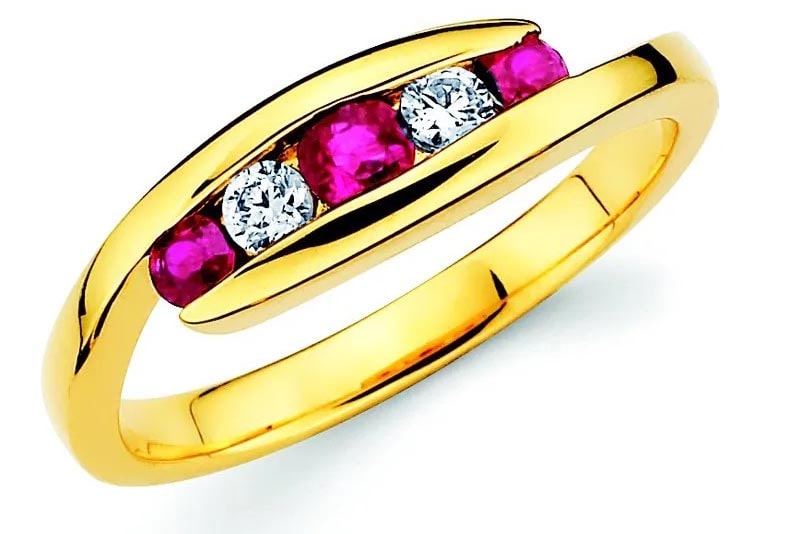 How to Pick Out the Perfect Anniversary Ring

When it comes to anniversary band shopping, it’s important that you gift something you feel really encompasses your one-of-a-kind relationship. Consider your partner’s taste, style, and preferences, too! Oftentimes, couples will choose an anniversary ring that resembles or pairs with their wedding and engagement rings.

Since many people stack their anniversary rings, they sometimes prefer them to match their original rings. Whether that be with the same metal or gemstones, it can accomplish a stunning look. However, there’s nothing wrong with being a little different, too! A wedding ring that already contains gemstones might stand out even more with an anniversary ring that contains different gems.

An anniversary band is all about the relationship the two of you have cultivated and the love you’ve shared. It’s most important that you feel you’ve picked out a ring that communicates that adoration!

You don’t have to wander far from Bemidji to find the right anniversary ring. In fact, you don’t even have to leave at all! Your friends at Ken K. Thompson Jewelry are here to help you find the perfect anniversary band to celebrate your unique love story and symbolize your everlasting love!

At Ken K, we want to help you make this anniversary as special as possible by ensuring you find something that will capture your heart! Stop in-store or make an appointment! A trusted jewelry consultant is ready to help you discover the ring that steals your breath away!

Let’s say you didn’t find the anniversary ring of your dreams in our cases here in the store or on our website. Maybe you have a specific ring style in mind, or want to transform a piece of your unworn jewelry or a family heirloom piece into an anniversary band? No problem! Stop into our store and speak with our master jewelers and on-site custom jewelry specialist!

Here at Ken K, we are happy to provide top-notch custom jewelry design services. We’ll work with you through the entire custom jewelry process, starting with your initial ideas or sketches and then put pen to paper to draft up initial sketches, create a CAD design, develop an exact wax mold of your design, and finally cast and place the exact diamonds or gemstones you want in your piece to deliver to you the custom anniversary ring of your dreams!

The sky really is the limit when it comes to anniversary ring options here at Ken K. Thompson Jewelry! Learn more about our custom jewelry design services here, and don’t forget to book an appointment so that we can give you the personal time and attention you deserve! We’ll see you soon!